We’re pleased to announce CAIRIS 2. Although CAIRIS is now over 10 years ago, the release of CAIRIS as a web application was the considered an incremental improvement over the original desktop application. In recent years, however, we’ve slowly improved its stability and added enhancements based both on our experiences and others. Since the over-haul of the UI (more on that shortly), we’ve felt confident enough to give CAIRIS a formal version upgrade.

The main improvements to CAIRIS in this new release are summarised below.

The CAIRIS UI was originally developed as a prototype using a mix of legacy HTML, CSS, JavaScript, JQuery and related packages. While largely functional, it has also become buggy and difficult to maintain and adequately test. The new UI has been redeveloped using Vue.js, which is significantly easier to maintain, test, and forms a better platform for future evolutions of the UI.

There is now a large, and growing, number of model validation checks supported by CAIRIS. Some of these have been incorporated into the visual models. For example, asset models are now shaded red based on the attack surface exposed by vulnerabilities. 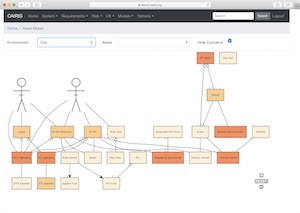 We hope you find this new release of CAIRIS useful. If you do find any problems, queries, or have requests for new features. please feel free to raise an issue.